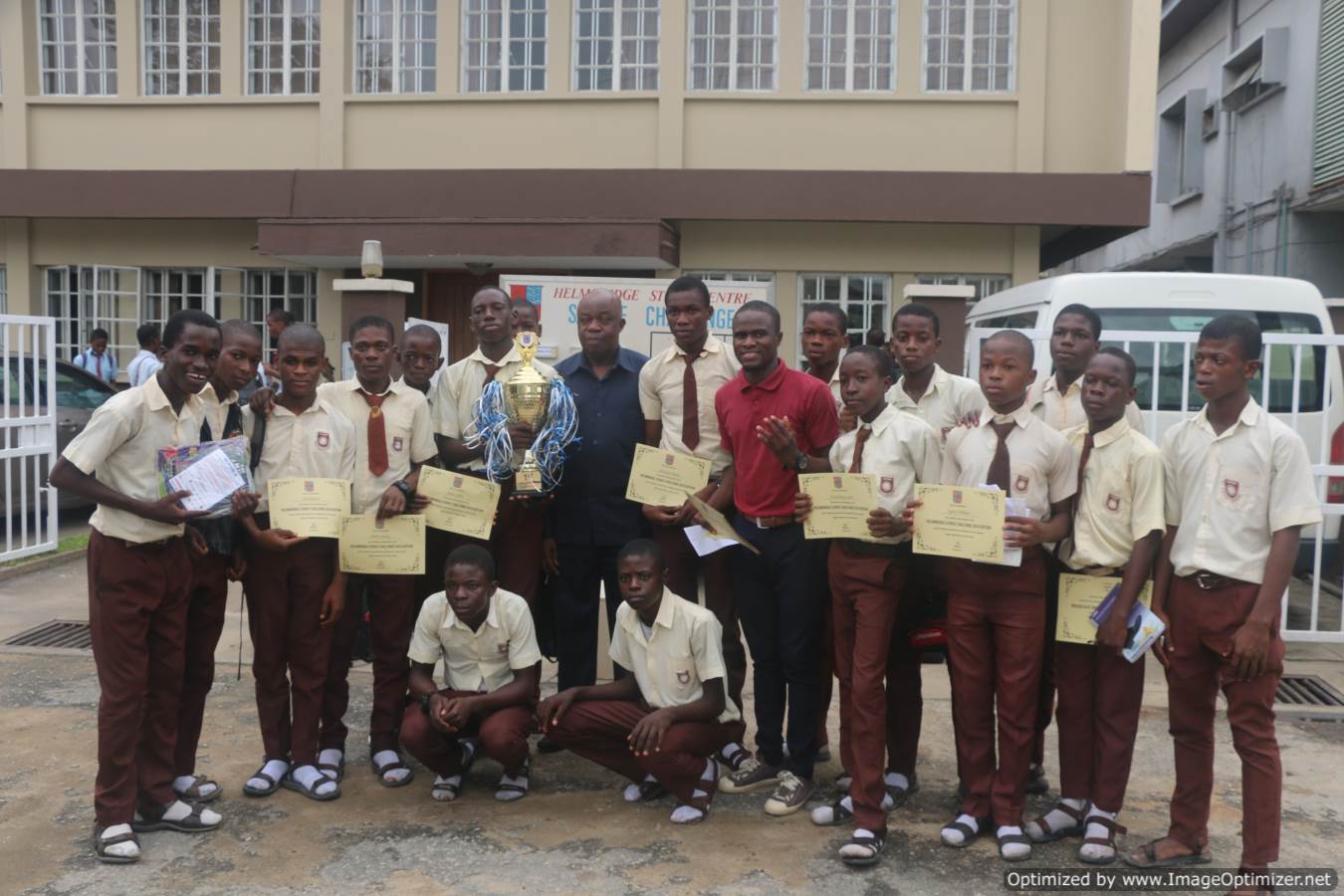 Enhancing Boys’ Knowledge through the Power of Science

Enhancing Boys’ Knowledge through the Power of Science

For over 35 years, Helmbridge Study Centre, Lagos, a project of Educational Cooperation Society, a non-governmental organisation managed by the Opus Dei (an institution of the Catholic Church) has been giving hope to boys in secondary schools and imparting knowledge in them through its science challenge, which recently produced a team of winners. Funmi Ogundare reports

Since 1982, Helmbridge Study Centre, a project of the Educational Cooperation Society (ECS), a non-governmental organisation managed by the Opus Dei (an institution of the Catholic Church) through its science challenge assists secondary school students, especially boys to be well grounded in the area of science and boost their study habit.

For participating schools, there must be a team of students comprising eight members, four each from senior secondary one and two, who must be accompanied by an official and a small group of supporters.

For the 2018 edition, 20 public and private schools in Lagos participated and Gbaja Boys Senior Secondary School, Surulere emerged winner. The representatives received a trophy, cheque of N150,000, a set of books donated by Chelis Bookazine, as well as certificate for each member.

St. Gregory’s College, Obalende and St. Michael’s Anglican School, Coker came second and third respectively and got trophies, a cheque of N100,000 and N50,000 respectively, as well as a set of books and certificates for each of the members.

The Director of the centre, Chris Itua said with the quality of questions and organisation, schools are beginning to take the challenge seriously with their teachers getting involved in the preparations.

He likened the science challenge to a world cup match saying, “when more schools get involved, that means we are going to screen more and once you have many schools, the organisation becomes more difficult because in spite of the games they play, we will have many rounds.”

He said over the years, the contest has made positive impact on the academics of the students; made them to cultivate the reading habit; as well as produced people that have made their marks in different fields of endeavour.

“People do say that the system of education has dropped, but we don’t agree. What the boys learnt can’t be compared with what obtained 20 years ago. They are better. So it is to get them to study so that they can improve in their academics.

“We have experimented it many times even when parents complained that their children were not doing well. It has been 100 per cent success. We have also monitored their academics even to the university level.

“The quiz master represented Eric More School some years ago. The time-keeper, who made first class in Chemical Engineering in the university, represented Penny College, some years back and his school then won the competition nine times. We still follow them up and it has been 100 per cent, even a principal sent me a letter that the competition has helped the boys to cultivate a reading habit.

“They can now study on their own without you forcing them and they are studying to be one of the best in their class. This year, I created a level playing field for those that have been coming; they have an idea of how to play the game. I also shared the experiences of those that have won with them.

“A teacher in St. Gregory’s College said they study from 7pm to 10pm every day, even during the mid-term break, many schools did that. Imagine if you go through those processes, studying will not be any problem for you.”

“What schools should work on to promote science is to get good teachers that can teach Mathematics very well so that students can fall in love with it. Maths and Physics are related, but once students are scared of calculations, they will not like it.”

On the challenges the organisation faced in putting the programme together, the director highlighted bureaucratic bottlenecks on the part of the government to approve the letters sent to its schools for students to participate; questions being wasted by schools that are educationally disadvantaged; as well as funding.

“When the schools are not good academically, they fail the questions and that means it is wasted so I ended up setting more questions. We had to set new questions till midnight. If the questions are not fresh, they will not be challenged enough. We were also trying to avoid the problem of repeating questions.

“Another challenge is raising funds; before we were not giving them anything and we felt that participation and the morale of the students were going down. In fact, they would have preferred to go for another competition. So we had to raise the prize money; we had to ask some of our friends for sponsorship and they threw their weight behind it.”

He expressed concern that most organisations prefer to invest their money in music and entertainment rather than education, saying, “just like the Big Brother Africa show, music sells and many people watch it. But in education, people are not interested. Individuals may be interested if their children are in such competitions. Education that will benefit the general populace, people are not interested in investing in it.

“Once the standard of education is going down, people start sending their children abroad for those that can afford it. They should be investing in education. The problem of this country is not leadership but education. There is an attack on the family so when the family is weak, the society will be weak, that is why corruption is everywhere. Moral, academics and cultural education, as well as our history are there, we can’t do without them.

“Aside just investing money into it, we still have to monitor it. The former Governor of Lagos State, Babatunde Fashola tried investing in education and even paid the teachers well, so why wouldn’t you have interest in teaching? He also renovated the schools through public private partnership (PPP) to bring back the glory of public schools. You can see the effect now but they are running it down again because there is no continuity. So if you must invest in education, you have to monitor it.”

In his remarks, a former Governor of Anambra State, Mr. Peter Obi expressed delight about the challenge and encouraged the winners to continue to work hard.

Obi, who was represented by a former Commissioner for Special Duties, Mr. Vincent Ezenwajiaku, said during his administration, he always supported such science competitions, adding that science is the bedrock of technology in the country.

“Investment in science and its impact cannot be overemphasised as this will go a long way in improving people’s knowledge.”

He expressed regret about the Big Brother Africa show, saying that the sponsors of such programme should invest in things that would educate the youths and develop the human resources of a country.

“The programme (Big Brother Africa) is not teaching any moral. I don’t see any impact in terms of engaging the youths to be better tomorrow. There is no other way to improve the lives of students other than engage them in science that will bring out the best in them and that is why it is always good to support them,” Obi said

A former quiz master, who had once participated in the contest, Mr. Omatseye Ogisi appealed to the students to be the change that the country needs, as that is what creates the champion.

He commended all the teams that participated in the competition, saying that it takes a lot to set the questions.

The duo of Fuad Hammed and Sebastian Daniel, who spoke on behalf of the winning team, expressed delight about their success, saying that when they participated in last year’s competition and got knocked out before the quarter finals, they were encouraged to study harder.

“From our experience last year, we learnt that there were things we ought to do to come out tops, so we studied our books and did research on the internet. Thanks to our Chemistry teacher, Mr. Shakiru Jimoh, who emphasised on continuous practice for us.”

They advised the centre to continue to encourage students to participate in the contest by increasing the prize money.

Asked how he prepared his students, Jimoh said he spent extra time with them by using textbooks that adopts the Nigerian and British curriculum to equip them with the knowledge.

He also expressed delight about their success, saying that the family, the school and the students themselves have roles to play in bringing out the best in them.